Clarity Copiers is one of the largest independent distributors of digital copiers and printers in the UK. When we were approached by their Bristol franchise to establish a local presence on Google we were only too happy to help. The Bristol branch of Clarity Copiers had not received a single inbound enquiry from the website so we knew we could make a significant difference.

Working with a big company that operates a franchise business model, presented a unique challenge that would involve a targeted local SEO campaign. Clarity Copiers’ franchise system meant their website presence was something of a mixed bag. In some regions, franchisees used a completely independent website URL. The Bristol franchise, however, had just an inner page on the main clarity-copiers.co.uk domain. This meant we’d need to target this specific page, as well as boosting the subdomain’s SEO signals for the Bristol region. 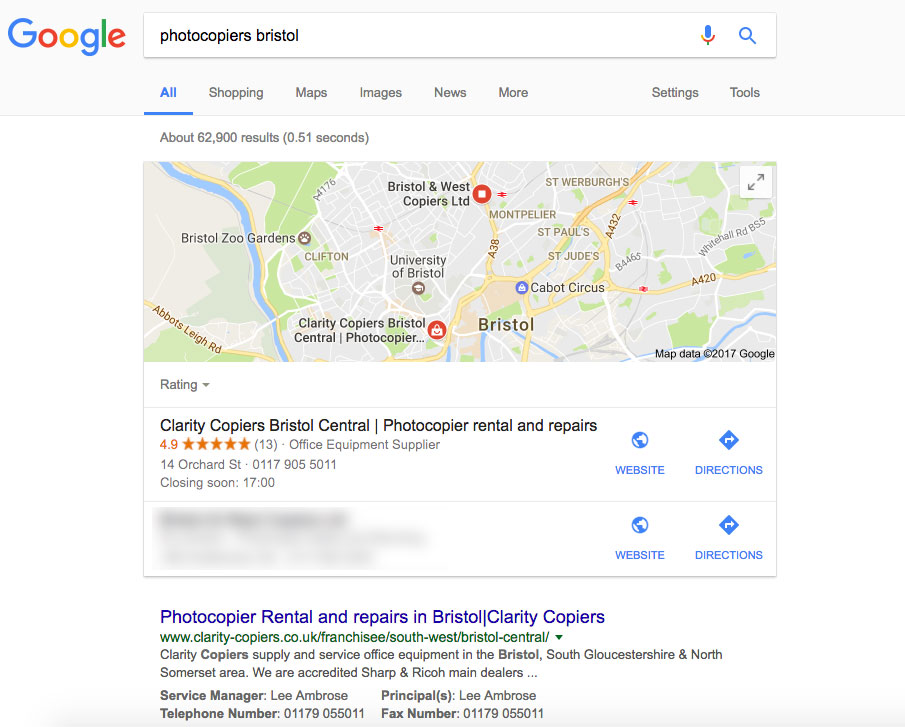 The local Bristol SEO campaign involved optimising their franchise page using a series of powerful local and niche citations and a small amount of blogger outreach. This allowed us to leverage the weight of the Clarity brand to quickly establish Bristol in local search results. In less than four months the franchise was starting to rank for photocopier related keywords and appeared in Google’s local pack which showed the company’s location on an embedded map above other organic search results.

The result is that Clarify Copiers in Bristol now receives 2-3 enquiries per week as a result of their vastly improved local web presence.

What the client said

In the past I have been sceptical & unsure of the benefits of SEO and always received calls from numerous people telling me they could get me to the first page of Google.

I met Paul at a business networking event and he offered a free review of my companies website and explained clearly how he could help me to achieve a better ranking on Google and other search engines without it costing anywhere near as much as i had been quoted by other companies.

I found Paul’s approach relaxed whilst being focused on the task and he has updated me regularly on what he has been doing on my behalf and I am pleased to say that after working with Paul for 3-4 months now, my company Clarity Copiers Bristol Central is number 1 on Google for Photocopiers and I have started to receive calls and interest direct from the internet which is something i wasn’t ever getting beforehand.

I would have no hesitation on recommending Paul & Superb Digital to any company who are looking to increase their visibility online.