With a late entrance into an already over-saturated market, Superior Vapour needed to quickly establish themselves as a competitor against the dominant vape retailers. Through a multi-channelled, integrated campaign, we built their online presence through strategic content marketing, social media, concentrated link building and digital PR. The results speak for themselves.

visitor traffic was increasing every month and products were appearing on page one on Google.

Superior Vapour is a vaping retailer with both an online presence and physical stores around the South West of England and South Wales. They stock high-quality, well-curated vaping products from mods to e-liquids. After working in the vaping business since its early beginnings, founder Leigh Flurry set up Superior Vapour in 2015 with the intention to supply only the best kit and establish the business as the South West’s premium retailer of both affordable and high end vaping technology.

Since working with Superb Digital our store has started to take a lot more revenue, visitor traffic was increasing every month and products were appearing on page one on Google…the no.1 SEO company in town!

Based in Bristol but sourcing and selling equipment from all over the world, Superior Vapour needed our help to establish their online brand and attract business from a global and domestic market. Leigh was also keen to build a franchise of vape stores across the UK.

Vaping really took a foothold in the European and US markets in 2009, so by the time Superior Vapour were looking to open the business, their competitors already had a few years worth of a head start in terms of a digital presence. As such, Superior Vapour were swimming upstream in terms of getting their products to rank as highly as their competitors.

As if that wasn’t enough of a challenge, due to the legalities and legislation regulating the “Tobacco” industry, we were unable to use Google Adwords or paid social media campaigns to drive traffic. Due to the still somewhat controversial nature of vaping, building backlinks also wasn’t going to be an easy task. 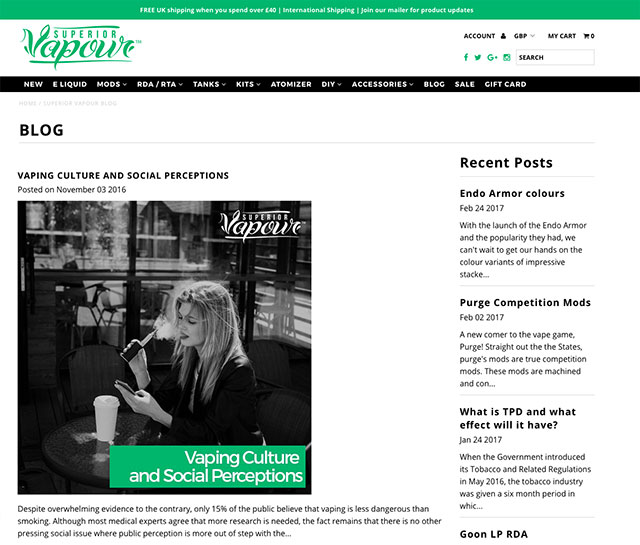 With the difficulty regarding content placement and advertisements off-site, we focused all our efforts on creating higher quality, well-optimised content for the website, and driving outreach through targeted social media campaigns. As vaping has grown as a market, so has the culture surrounding it. We planned to tap into the vast and highly engaged culture of vaping by utilising Superior Vapour’s onsite blog to its full potential.

In order to build that all important site authority and get Superior Vapour ranking above its competitors, they needed links and a lot of them. So we tapped up our network of lifestyle bloggers, especially those that had just given up smoking, or were trying to give up, providing them with fresh content or asking them to link back to Superior Vapour’s content from their own blog posts.

After a few months, we started to see results with visitor traffic increasing every month and the store starting to take in more revenue. We also started to see products appearing on page one of google, with some in position one.

Outside of a whopping 393% increase in organic traffic and a corresponding quadrupling of revenue, the holistic effects of our SEO and digital marketing services to the Superior Vapour team has been transformative to their business. But outsourcing their digital marketing to a trusted and transparent agency like Superb Digital has opened up other opportunities for Superior Vapour. Knowing that the online face of his business was in good hands, has allowed Leigh and his team to focus their energies elsewhere, such as developing the website and growing the franchise.

Are we a good fit to work together?