Google Penalty and Ranking Recovery for Bristol IT Support Company

Bristol based IT services company, Evolvit, came to Superb Digital in 2015 with a pretty serious problem regarding their website’s rankings in Google. It turned out Evolvit had completely dropped out of the search engine results pages (SERPs) altogether, leading us to immediately question their previous SEO activities.

With a team of computer engineers based from Bristol down to Devon, Evolvit is an IT service provider covering a large swathe of the South West of the UK. Founded by Darren Hayes and Dave Blackhurst over 20 years ago they offer a huge range of outsourced IT support services from remote hosted desktop to cyber security and disaster recovery.

Evolvit came to us with a significant issue, which was the suspected penalisation of their site by Google and the near complete disappearance of their website from the search results. For an IT based business, not having a local web presence in the search results was a serious problem. The challenge for us would not be identifying the fact that they had been hit with a penalty (this was clear very quickly based on our experience), but the necessary work required to fix it and get the penalty released.

After this, our challenge was to convince Evolvit’s directors that investing in ongoing organic SEO with a trusted digital marketing agency like Superb Digital, would not only prevent this happening again, but ensure they regained and then surpassed their previous search rankings. 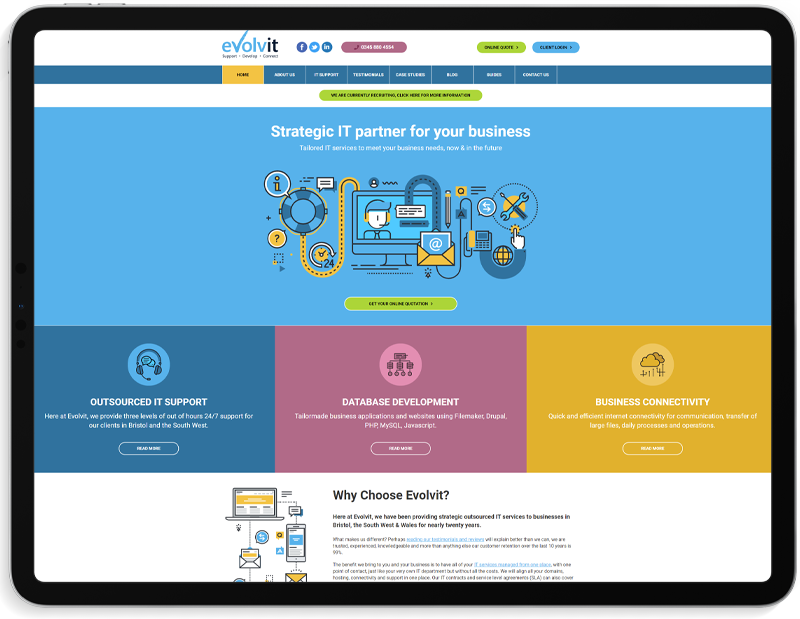 We then set about analysing the site’s previous SEO activity by running a full backlink analysis. It didn’t take us long to conclude that an algorithmic Penguin penalty was probably to blame for the disappearance of the website from the search results pages (Penguin is a Google update first rolled out in 2011 to penalise sites with poor quality link profiles). With Penguin going through several iterations since the original rollout in 2011 it was more than likely Evolvit’s website had been caught out by one of these recent ‘recalibrations’.

After identifying the problem, Evolvit were only too keen for us to fix it so we set about putting together a plan to get the penalty lifted. This involved running detailed link reports and crunching through thousands of the company’s poor quality backlinks that had been built using outdated techniques over the years. Being careful not to target good quality links, we then set about getting these bad links taken down.

After our rapid success with the Google penalty recovery, we suggested a new organic ‘white hat’ SEO campaign to build a hub of informative content and authoritative, reliable and safe links. They agreed and within 3 months the site was climbing high in the SERPs again, which is where it had been before the Google penalty.

On top of the ongoing SEO service we provide to Evolvit, they commissioned us to design and build their new website in 2018. Part of this brief was to help them also target nearby Cardiff and Weston-super-Mare, which we factored into the web design process.

With a lot of high value content built up over a number years on their previous website, it was important to retain this content and ensure that when the new site launched it was all still accessible, which we did through 301 redirects.

Much to their delight, the EvolvIit website was ranking in Google again within a few weeks. After the algorithmic penalty was lifted, the site had predictably dropped in the rankings compared to where it had stood before the penalty, which we explained was to be expected after a backlink cleanup.

We are now continuing to build high quality links and develop content for Evolvit, helping the site continue to rank on page one in Google (and this time stay there).

Be Found. Be Superb

We love talking about digital marketing strategy and SEO. Tell us a bit about your business and we’ll call you back to discuss how we can help.